We hope everyone’s back from Labor Day refreshed.  The first big news is that we are extending the deadline for the open call for proposals.

We hope the extra two weeks will allow applicants that have been traveling over the summer an opportunity to submit high quality HIA proposals. We look forward to reading them.

If you’re planning to apply, but haven’t yet, we strongly encourage you to start your application. Creating an account in the online system will give you access to details, instructions, and other information that you will need.

Please also check out all the resources on our funding opportunities page, including frequently asked questions, and recordings of the webinars.

[Sal's Editor's Note: If you are in the US and you are thinking of doing a HIA then you really must apply. You have nothing to lose and everything to gain.Someone has to get that money; it might as well be you.]
Posted by Salim Vohra No comments:

Guide for Stakeholder Participation in HIA

"This guide is a collective product of the Stakeholder Participation Working Group, which emerged from the March 2010 HIA in the Americas Workshop. The Guide primarily targets HIA practitioners who are working to improve stakeholder participation and leadership in the practice of HIA. It may also appeal to community groups and stakeholders who want to more effectively participate in, lead, or influence an HIA. The guide distills stakeholder participation techniques, case studies, and guiding principles from various fields of expertise, including HIA, environmental and social impact assessment, land use and transportation planning, community-based participatory research, and public health. This is a living document that will be updated as new information becomes available. The Guide is available online at the Society of Practitioners of HIA (SOPHIA) website: http://www.hiasociety.org/rguidance.html Any questions, suggestions or comments can be directed to: Kim Gilhuly, Human Impact Partners, kim@humanimpact.org, (510) 684-1275."
Posted by benharrisroxas No comments:

Michiko Hoshiko: Researching the use of health impact assessment in Japan and Australia

I have been conducting research related to health impact assessment in Japan since 2008 at the Kurume University School of Medicine. As part of this I have been involved in several HIAs, for example our health impact assessment of the transition to a “core city” (core cities are cities of more than 300,000 people that take on greater governmental autonomy and some of the responsibilities of prefectural governments) and a HIA of the redevelopment of a major hospital site. I have also been involved in the development of a HIA screening checklist for use in government.

Following the completion of my PhD I have been able to pursue further research into HIA, through a fellowship based at the University of New South Wales in Sydney, Australia. My aims during the fellowship are:

1) Investigate the use of HIA screening checklists I will investigate the use made of the NSW Healthy Urban Development Checklist as a tool for engaging with local government officials around population health issues, comparing it with the checklist I developed at Kurume University in Japan.

I hope to develop at least two academic journal articles on this program of research. If you’d like to find out more about my research or get in touch please email me at hmichi AT med.kurume-u.ac.jp
Posted by benharrisroxas No comments:

An interesting article published this week in the PNG Post Courier. The Health Secretary ask companies operating with natural resources in the country to conduct HIA as part of their project management. The Health Secretary recognises that while environmental and social impact assessments are national requirements, HIA is not yet part of the mining code. The Health department might approach the government and ask to emend the mining code and he envisages a bigger role for the health sector in the management of the non-renewable resources.
Resource challenge

"THE Health Department is calling on all resource sector partners to provide health impact assessments.
That's according to Health Secretary Pasco Kase at the 48th medical symposium which started yesterday.
Mr Kase said the Health Department wanted to plan in advance with the resource sector on how best both parties could mitigate negative impacts and ensure the positive benefits were realised.
Mr Kase said currently the PNG Mining Act required companies to undertake environment and social impact assessments but did not require health impact assessments.
International best practices guidelines to implement health impact assessments have been established and are documented by both the international Council on mining and metals and the international finance corporations and both can be implemented in developing a policy framework for PNG.
The secretary noted that there were a number of countries throughout the South East Asia region such as the Philippines and Indonesia as well as Africa who had already chosen to enact laws that specifically ensure that a health impact assessment was carried out as part of mining project approvals.
This has allowed for better management of potential health risks on both mining company employees and also the surrounding communities.
"We will be approaching the Government to consider amending the mining act to ensure that Health Impact Assessments are undertaken as part of the licensing approval process,'' he said.
"This should start well before mine operations commence, as during pre-feasibility and feasibility- you are impacting on communities and the health system.''
Mr Kase said he wanted to ensure health impacts were identified early and systems were put in place to manage and mitigate the social impact, the potential severity of these impact on the livelihood of people and surrounding communities was vital for the mine, the community and the Government.
While acknowledging companies like Oil Search, Ok Tedi, Porgera Joint Venture and Lihir that support community health programs, he said the health sector wanted full participation with Government and other stakeholders.
He noted some of the potential health impacts of mining and these were:
* Infectious diseases: malaria, HIV and influence;
* Chronic diseases: heart disease, cancer, bronchitis and asthma;
* Nutrition disorders: malnutrition, vitamin deficiency and obesity;
* Physical injuries: accidents, poisoning and violence;
* Mental health and wellbeing: depression, stress and anxiety and;
* Health equity/inequalities: infant mortality and life expectancy between rich and poor, between groups and between other vulnerable people."
Posted by Francesca Viliani No comments:

Thank you and Handover to Geneva! Thank you to everyone particularly the volunteers and the staff of the hotel and the conference organising team, the worker bees, for making this a successful conference. Thanks to the local and the international scientific committee.

Will be debriefing on what went well and how we move the conference forward and what we can learn from your experiences and reflections of the conference.

Jena Simos, thank you for hosting such a wonderful conference and it is a great honour and huge pleasure for us to invite you to the next conference in Geneva. The organisations involved are the University of Geneva, WHO and the Swiss HIA Platform.


Look forward to seeing you there, see you very soon!
Posted by Salim Vohra No comments: 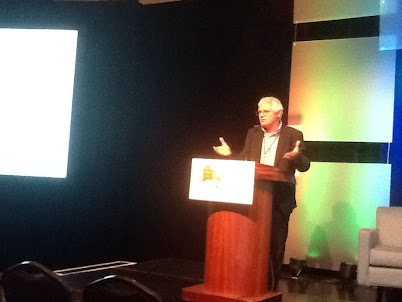 Plenary 4: HIA in Decision-making: what we know and what we need to know 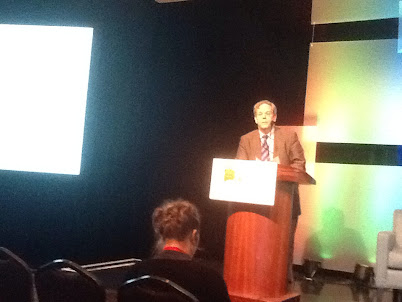 Welcome to this last plenary! 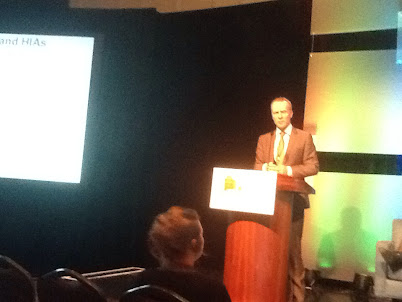 What does HIA achieve


What is (sometimes) less important


What is really really important


What's the future: how do we open the door, beyond one off effective HIAs? 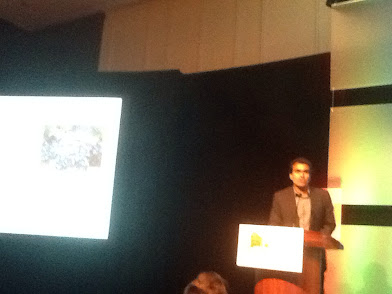 From research measures to performance measures

Factors contributing to our success

What do decision makers want?

Analysis of impact of the processes of decisions
Andre Fortier


Q&A
Where does HIA works

Q: in what area have recommendations of a HIA are more easily accepted e.g. in Quebec, in your opinion? And where recommendations are not accepted and not implemented by a Government is there some other process such as the Ombudsman in Quebec?

A: Where the recommendations affect the economic feasibility or where the recommendations involve restrictions on the public. The ombudsman has a lot of latitude but you need to think about the fact that the public health system is part of government so that going out to other structures is problematic. Our role is to clarify and inform a decision and for elected officials to make the decision.

A: Where the recommendations are beyond the power or responsibilities of the decisionmaker.

Q: How do decisonmakers manage the volume of policy that they have to decide?

A: it is through provide information and analysis of draft proposals so that some policies are not taken forward because of what the assessment has found in the early policy development process.
Posted by Salim Vohra No comments: 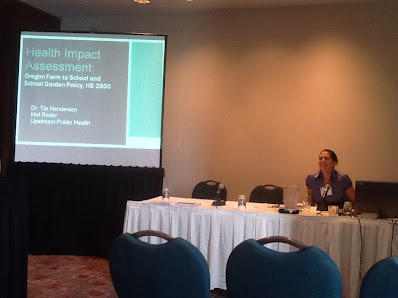 What is Farm to school?

How will we engage stakeholders for a national policy was an issue we had to grapple with.

Assessment methods for analysis of impacts


Posted by Salim Vohra No comments: 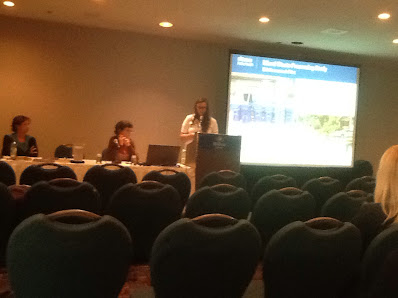 Found that steps of the process were not linear sometimes screen g, scoping and assessment occurred at the same time and we did not consider monitoring and evaluation.


We don't do formal HIAs because staff find it overwhelming at the moment. There have also been missed opportunities to do HIA.


Can we adapt the HIA process or do we have to follow all the steps. Yes, we developed the Draft Torornto Public Health HIA Checklist. 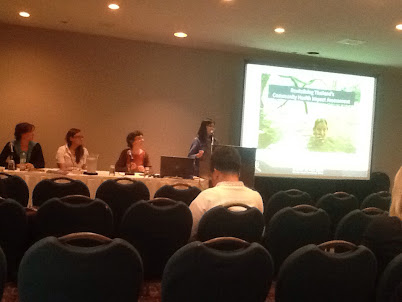 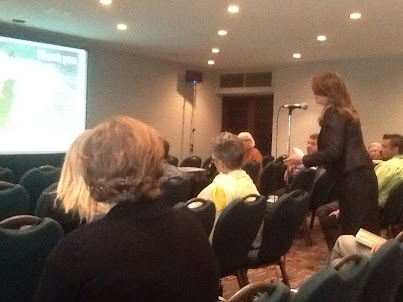 Q: How do you help communities access literature on health so that they can look at the evidence on health impacts?

A: In Italy, public health act as the representative of the community so that we are still looking at this issue.

I: Healthevidence.ca is a website provides systematic reviews of key areas of evidence.

Q: one o fthe main challenge in community participation in HIA is how we reach 'hard to reach' groups, they don't normally get involved, 'invisible' populations?

A: In Thailand, we don't look at the physical village or district level, we start from a small group concerned about an impact and then other people start joining the process.

I: Our experience use PATH CHIA our process is to train local people to lead the process, and then get the community to develo their own tool, in our local context 56 focus groups were used to develop the tool.