In response to suggestions from you (i.e. the people who read this blog) I've added two easy ways for you to stay up-to-date:
This will hopefully save you visiting this blog only to find that we haven't posted recently.

Please keep sending in your suggestions for improvement!
Posted by benharrisroxas No comments:

The HIA Gateway will be unavailable while NICE are opening up their new website this week but a contact person is available for people wanting to use material on the site during the rest of this week.

NICE will establish a link between their new site and HIA Gateway URL as a temporary measure so that the site remains live to provide time for seeking an alternative provider.

NICE will set up a meeting as soon as possible to discuss the way forward for finding a new host for the HIA Gateway site.

Information courtesy of Colleen Williams from the UK Department of Health via Salim Vohra.

A blog post about a poster about a blog... 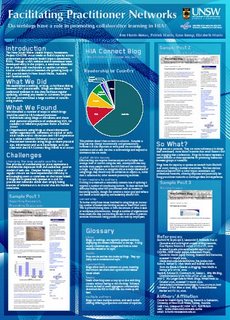 At the risk of being slightly too self-referential for my own good I thought you might be interested in the poster about this blog [PDF file, 1.95 Mb] that Patrick is very kindly taking to the UK and Ireland HIA Conference for me. As the poster says "despite having a number of regular visitors we have experienced difficulty in encouraging users to comment on the issues raised" so I'd be interested to hear your thougts on it! :)

The conference program is now available and it looks like there will be a number of really fascinating sessions. I'm very interested to see that so many people will be presenting on capacity building issues. At the last conference in 2004 it seemed as though there were only a handful of people engaged in system-oriented capacity building work - has there been a shift in the focus of HIA work internationally?
Posted by benharrisroxas 2 comments:

Screenshot of NICE's announcement of the closure on the HIA Gateway

NICE has announced that the HIA Gateway will be closed at the end of March. The Gateway was one of the original and best HIA resources on the web; it's loss represents a considerable blow to the HIA community.

The notice on the Gateway says that NICE are seeking a new host for the information held on the Gateway. What are you suggestions and ideas?

A number of suggestions have already been made on the HIANET listserv including hosting the information on the South East Public Health Observatory or setting up a HIA wiki.

If you post your ideas and comments here I'll consolidate them and then distribute them on the HIANET and IAIA HIA listservs.
Posted by benharrisroxas 1 comment:

There's a new HIA newsletter being put out by the Institute of Public Health in Ireland. It's a fairly low-key publication at the moment but it may be worth keeping an eye on it in future.

It's good to have a companion to our own humble HIA E-News.
Posted by benharrisroxas No comments:

Public Health has an interesting article that reports on a survey of New Zelanad policy-makers' attitudes to the determinants of health:

There are a number of interesting findings in the survey but the one that I find most compelling is the attitudes to making HIAs mandatory that are reported: 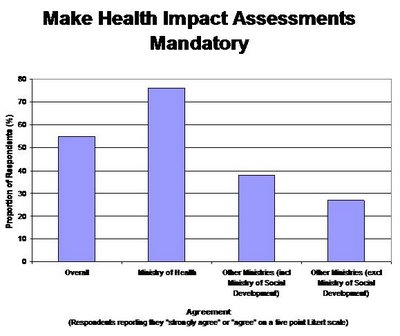 As you can see, health policy-makers are largely supportive of the ida of making HIAs madatory (76%)but policy-makers from other sectors are less convinced (38%). Support for the concept of HIAs being mandatory is further reduced when respondents from the Ministry of Social Development, probably New Zeland's largest human services ministry, are removed from the "other" catgory (only 27%).

This is quite telling becuase New Zealand has done a moderate amount of work in developing HIA and using it to assess other sectors' proposals (and it's not just government that supports its use).

I suspect that if a similar survey was done in Austalia or other countries where capacity to undetake HIA is being built there may be even less support for the idea of making HIA mandatory.

What do you think about this? I think it suggests that a softly-softly approach to involving policy-makers from non-health sectors in HIA may be more appropriate than a regulatory/mandated one.

Objectives
This article describes New Zealand government policymakers' awareness of, attitudes toward and self-reported use of ideas about the determinants of health. Some comparison with an earlier Canadian study is provided.

Methods
Employees with policymaking and advisory responsibilities in government departments of health, social development, housing, education and finance were surveyed.

Results
More than half of the respondents (58%) were familiar with ideas about health determinants. Eighty percent felt that health determinants should be considered in all government policy, but that more practical information on effective policy interventions is needed. Commitment to the idea that the economy should take precedence over reducing health inequalities was low.

Conclusions
There is a demand for literature on health determinants that is sector specific and which provides practical and proven information about effective interventions that influence health.
Posted by benharrisroxas No comments:

I recently came across IMPACT's Capacity Building for Health Impact Assessment webpage. It's a project that brings together IMPACT, Liverpool Primary Care Trusts and the Liverpool City Council to build capacity to undertake HIA. They're doing interesting work, quite similar in nature to our NSW HIA Project.

Building system capacity to undertake HIA is one of the primary challenges facing governments interested in utilising HIA. (more) Past experience suggests that top-down or legislative approaches requiring HIA with little prior capacity building will fail.

CHETRE has taken more of a multi-pronged approach to building capacity, drawing on the NSW Capacity Building Framework: 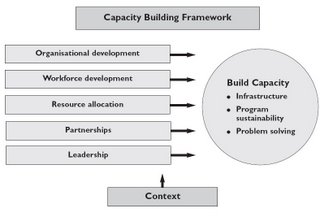 I know that IMPACT's work draws upon this approach as well.

What HIA capacity building work are you currently engaged in? What has worked and what hasn't?
Posted by benharrisroxas No comments: