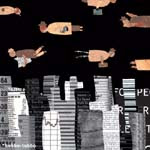 I work with developers and businesses every day and there are times when it can be frustrating to get them to understand why they need to consider health and wellbeing issues beyond occupational health and safety. But often they do engage and do listen though they don't immediately jump to doing HIAs they are thoughtful enough to ask pertinent questions.

One of the most striking things about international policy and practice around project-level HIAs is the complete absence of discussion and debate about how we engage with developers and businesses. For me, they are 'HIA's forgotten stakeholders' or perhaps they are the proverbial 'elephant in the room' everyone knows they're there but doesn't want to look at them or discuss their presence.

Developers are seen as being, and sometimes can be, obstructive and hostile to HIA and its ethos. But often the fault lies as much with us in the public health and HIA community as with developers and businesses. We espouse values of openness and transparency but that seems to extend only to communities, NGOs and public institutions. We see developers as antagonists rather than fellow protagonists in the HIA drama. Society's 'villains' rather than its 'heroes'.

Often we don't even see them as stakeholders, let alone important stakeholders, in the HIA process. And in some cases, apart from wanting to access their environmental and health information, they are actively excluded from the process.

Quite rightly, there are concerns that developers, and businesses in general, have considerable financial power and political influence but we in the HIA community should not be afraid to engage, discuss and debate with them.

We need to be more active in educating, persuading and lobbying these key stakeholders about HIA, it value and how they can become enthusiastic and co-operative partners in the HIA process. Okay, so some of you are going to say 'Enthusiastic partners, never gonna happen!'. Maybe so, but with corporate social responsibility, ethical funds and sustainable actions growing in prominence developers and businesses are beginning to understand that need to grapple with the health and wellbeing implications of their plans and projects.

The lack of an active engagement programme, anywhere in the world, that reaches out to and engages with this group is startling and a critical weakness of current HIA policy and practice. Why so? Because ultimately it is businesses and local communities who tend to foot the bill for HIAs either directly or through taxes.

Having a proactive engagement process with developers and businesses has more pros than cons if we are strong in our values. It is only by proactively engaging with them and winning them over that we can transform their vision of the world and the free market to include health and wellbeing - alongside sustainability and the environment - as a critical factor in enhancing their business success.

Lastly, if Greenpeace and Friends of the Earth can do it why shouldn't and why can't we?
Posted by Salim Vohra No comments: