I grew up in the U.K. during the 1980’s and 90’s, Cardiff, the capital of Wales, had a reputation for being a rough, dead-end place, decimated by high unemployment caused by the closing of coal and other industries. While the rest of Wales was renowned for its natural beauty, Cardiff was to be avoided at all costs, glimpsed from the motorway if seen at all. So when I heard that the 7th International HIA conference was to be held in Cardiff, and that I was going, I was more than a little nervous. As it turned out however, these dark thoughts were entirely misplaced. As soon as we arrived, the taxi driver taking us to the hotel, past gleaming new buildings, told us with pride how Cardiff had put its rough past behind it, reinventing itself as one of the UK’s premier cities to live in and visit.

He wasn’t wrong, and while there I recognised that Cardiff was in fact the perfect place to have the latest HIA conference. The capital city embodies Wales’ regeneration as a healthy place to live, based on the legacy on health left by an industrial past. As the 2nd Minister for Health said at the conference dinner, re-iterated by speakers at the conference, the Welsh government is taking a ‘twin-track’ approach to health. One track refers to clinical services, the other to an agenda to improve health and reduce health inequalities. HIA is recognised as an important tool within this broader agenda.

The conference itself brought up some very interesting areas for those interested in HIA in Australia and NSW to consider. One was evaluating the effectiveness of HIA. The first keynote speaker, Professor Sally Macintyre from the Medical Research Council in Glasgow, threw down the evaluation and effectiveness gauntlet from the word go. While some delegates were concerned over Professor Macintyre’s familiarity with HIA, her presentation did reasonably suggest that for HIA to become better recognised as an effective tool, there needs to be a stronger loop between the assessment step and the monitoring and evaluation step. Interestingly this was reflected in the ‘capacity building’ session I presented in. Out of the four speakers only Professor Andrew Danenberg, reporting on developments in the U.S. via HIA case studies, referred to the impact of those HIAs on proposal development and decision making. Evaluation of HIA effectiveness is an area we can improve on in Australia (and are working on). However this is reflective of where HIA needs to improve internationally.

In recognition of this shortfall, the U.K. department of health has commissioned a cost benefit analysis of HIA. While the final report is yet to be released, Jacqueline O’Reilly of the York Health Economics Consortium, who are undertaking the analysis, presented on its methodology. The project builds on the process-impact-outcome framework, covering rapid and comprehensive HIAs across a broad range of subject areas as they are being conducted. Cost is based on time-sheets and wage rates of those involved and the stages in HIA. Benefits are threefold. Process benefits include community engagement and increased partnership working, the impact benefit (the primary benefit) is the impact benefit on informing and influencing the decision-making process, and the outcome benefit is the impact on public health. While the proof of the pudding will be in the final report, the project is a good example of how HIA can be evaluated. The report hopefully should help HIA move forward from the paralysing debate on the problems of conclusive causation. Let’s follow this example and just get on with it!

Another regular that reared its head during the conference was where HIA sits in relation to other assessment processes, with Environmental Impact Assessment (EIA) the most talked about example. From the ensuing debates it became clear that a number of people see the future of HIA as part of EIA, although I noted many of these people worked for EIA consultancies. Others see HIA as a stand alone process, noticeably health professionals. I myself came away thinking that both are important, HIA as separate on some proposals, and on others within EIA as long as the HIA component is done effectively. The debate also raises other questions: Is this is a golden opportunity for health to work intersectorally? Would this require further legislation that incorporates both a health protection and health promotion focus? Further discussion on this is warranted in NSW, particularly on planning and urban development issues.

What is occurring in Europe provides some useful insights. The recent Strategic Environmental Assessment (SEA) directive related to land-use planning from the European Union requires the consideration of the likely significant effects of a range of topics including population and human health into strategic spatial (which is replacing land-use) planning. In a plenary address on ‘Integration, Planning and HIA’, Ben Cave of Ben Cave Associates argued that SEA provides a golden opportunity for health to re-unite with planning, and for HIA to be a vehicle for this. Mr. Cave argued that HIA assists this intersectoral work while putting health on the planning agenda by encouraging action around shared definitions, concepts and language on health and health impacts. Later in the plenary, Hugh Barton from the University of the West of England added another bow to this debate. He argued that HIA should be part and parcel of an integrated approach to assessment, based on the concept of sustainability, the planning tool for which is a health map. Of interest was that this health map is based in the original determinants of health ‘Rainbow’ by Whitehead and Dahlgren. From a health professional’s perspective, it is encouraging that planning appears to want to engage with health around a broad concept of health, although the required driver may be broad directive such as SEA.

There were also excellent presentations on actual HIAs and the lessons learnt from these. Of relevance to all HIA practitioners was the experience of a local HIA undertaken on a proposal to erect 367 wind turbines on the island of Lewis in the Outer Hebrides. Apart from the findings of the HIA - for example that much of the island’s roads float on marshland, with implications for trucks carrying turbines reaching over120m in height! – was the process of the HIA itself. This apparently took place without any level of capacity building or support for those who conducted the HIA. Problems beset the HIA from the outset. The lesson is that without some level of expertise and support, such HIAs have the potential to be fraught with difficulties.

One other notable presentation was Mary Mahoney’s plenary on Healthy Public Policy in Victoria. Mary talked candidly about the challenges and achievements of her work on HIA in Victoria, and produced the ‘piece de resistance’ of the whole conference, a short film of cowboys ‘herding cats’. The ensuing mirth reflected how well this resonated with the work of many, including us in NSW, in the audience.

To conclude, a comparison of HIA in Australia and NSW to other countries is useful. Pleasingly our work appears to be in sync with HIA as it has been developed and is developing in other countries. However, we are also in a strong position to strengthen HIA internationally based on our current work. For example our work in NSW with planning will provide useful lessons for all. We also may be in a useful position to strengthen the evaluative component of HIA while we are embedding HIA in the system rather retrospectively or as an afterthought.

Oh and one last thought. Anyone planning on going to Wales or the UK on holiday, I recommend you spend a few days in Cardiff!

This piece first appeared in issue 15 of the HIA eNews.
Posted by benharrisroxas No comments: 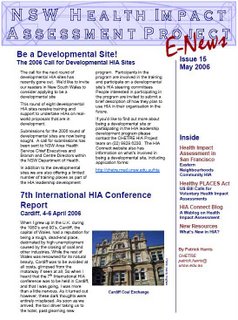 The abstracts for the upcoming IAIA conference are now searchable online:

Abstract Listing
Even if you're not attending the conference the 28 HIA abstracts are well worth a look. Contact details are included as well if you'd like to contact people about their work.
Posted by benharrisroxas No comments: