There's been considerable debate in Australia recently about whether there would be population health benefits in repealing mandatory cycling helmet laws. A new re-analysis of the data published at the Conversation shows there’s a good case for keeping helmet laws.

I don't know enough about the topic to have an authoritative opinion but it strikes me that this issue is reminiscent of many of the trade-offs that have to be considered in HIAs. Namely, moderate benefits to a larger group of people being traded off against severe impacts for a small group.

The current debate around helmet laws has focused on historical analyses of policy impacts, but there's been relatively little discussion about the role that values should play in guiding decision-making. A precautionary approach might suggest that you need to do everything you can to reduce the incidence of brain and other injuries (a focus on severity). A comparative risk approach might weigh up the scale and degree of benefits to a broader group against the negative impacts on a smaller group(a focus on magnitude).

We can't pretend this sort of decision-making doesn't involve values.
Posted by benharrisroxas No comments: 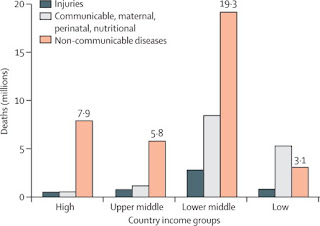 Very interesting graph, showing that in all countries non-communicable diseases are a significant cause of early deaths and only in low income countries do communicable, maternal, perinatal and nutritional disorders cause more early deaths.

A recent paper in The Lancet argues the following:

Despite the threat to human development, and the availability of affordable, cost-effective, and feasible interventions, most countries, development agencies, and foundations neglect the crisis.
The UN High-Level Meeting (UN HLM) on NCDs in September, 2011, is an opportunity to stimulate a coordinated global response to NCDs that is commensurate with their health and economic burdens. To achieve the promise of the UN HLM, several questions must be addressed.
This report, presents the realities of the situation by answering four questions:
Action against NCDs will support other global health and development priorities. A successful outcome of the UN HLM depends on the heads of states and governments attending the meeting, and endorsing and implementing the commitments to action. Long-term success requires inspired and committed national and international leadership.
The most cost-effective interventions are:

These three interventions, if widely adopted, would prevent 23 million deaths over 10 years in 23 low-income and middle-income countries with a high burden of NCDs at a cost of $1·20—2·40 per person per year.

Click here to read the article.
You will need to register for free before you can access the full article.
Image courtesy of The Lancet.
Posted by Salim Vohra 1 comment:

The first ever WHO/World Bank World report on disability reviews evidence about the situation of people with disabilities around the world.  The report contains topic-specific chapters on:
Within each chapter, there is a discussion of the barriers confronted, and case studies showing how countries have succeeded in addressing these by promoting good practice.
The report offers nine concrete recommendations for policy and practice which if put in place could lead to real improvements in the lives of people with disability.
Click here to download a nice pictorial easy read version as well as a summary of the full report.
Posted by Salim Vohra No comments:

Impacts of micro-credit: a study from the Philippines

Studies of the impact of micro-credit/ micro-loans have painted a mixed picture of the benefits that they deliver. Proponents argue that microcredit mitigates market failures, spurs micro-enterprise growth, and boosts borrowers’ well-being.

Yale and MIT researchers - working with First Macro Bank in Manila, Philippines - set up the financial equivalent of a double-blind trial. First Micro Bank (FMB) provides three-month micro-loans that including fees has an annual interest rate of 60%. FMB is considered a reasonable example of a "second-generation" microloan bank, and it has received support from the US Agency for International Development.

FMB's risk evaluation software was set up to stratify potential borrowers into three categories: low risk, marginal, and high risk (rejected) candidates. The low-risk group got loans, but, for the marginal borrowers, the program was set up to randomly approve a subset, ensuring that there would be experimental and control populations of roughly equal risk. Bank employees had no idea that the selection process had an element of randomness, and in fact, accidentally made loans to five people the software rejected.

The loans went to over a thousand individuals and groups that were reasonably representative of the Manila population as a whole. Then the authors engaged in a little economic stimulation of their own, paying researchers at a local university to conduct follow-up surveys of the loan recipients starting 11 months after the loan. Given a 70 percent response rate, they ended up with information on over 1,100 borrowers.

Thus, microcredit may work, but through channels different from those often hypothesised by proponents.

Many of you will have heard about Barbara Starfield's death on 10 June 2011. She was a global champion for health equity and primary care. You can read more about her at the Health Affairs Blog and on Wikipedia.
Posted by benharrisroxas No comments:

We're mobilised, but in a less activist way 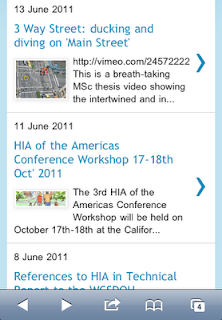 We've updated the blog so it's now more friendly to mobile devices. Please take a look and let us know what you think.
Posted by benharrisroxas No comments:

After doing a great job with the conference Ana Rivadeneyra and the other organisers have released a very thorough report on the HIA'11 Conference in Granada:


Please find attached the final report of the HIA’11 conference held in April in Granada.

For those of you who could not attend, I take the opportunity to remind you that all videos from plenary sessions are available in original/dubbed version at the EASP live stream webpage together with the Powerpoint presentations and the book of abstracts, among other conference materials.

This is a breath-taking MSc thesis video showing the intertwined and interconnected nature of danger and safety on a typical New York junction (read pretty much any major urban centre around the world).

Simply amazing both for what it shows and as a work of art in it's own right.

[Ron Gabriel via Kottke via Gizmodo]

The 3rd HIA of the Americas Conference Workshop will be held on October 17th-18th at the California Endowment in Oakland, CA.

It is a two-day workshop that aims to provide leadership to HIA practitioners by offering a forum for HIA practitioners to network, contribute to progress in the field, and share strategies to elevate the practice of HIA. The workshop will also promote excellence in HIA by sharing best practices, discussing issues and challenges, and disseminating newly revised practice standards and guidance.

It is intended for current practitioners of Health Impact Assessment in North, Central or South America and the content will therefore be focused on HIA practice in the Americas.

Registration is limited to 120 participants, and will be taken on a first-come, first-served basis. Participation will be limited to no more than 3 individuals per organisation. Non-Americas participants are welcome.

Based on your responses to the registration questions, a member of the planning committee may contact you to discuss your participation.

If you have additional questions, you can contact the organisers directly at registration@humanimpact.org.

References to HIA in Technical Report to the WCSDOH

The WHO has released a draft technical paper for the World Conference on Social Determinants of Health (WCSDOH). It includes some quite limited references to HIA:

Assessing the health and equity impacts of different policy options

If reducing health equities is identified as a high level priority across policy-making, there is the possibility to make use of a range of tools to consider equity impacts of policies of various sectors. Two key approaches are the use of health impact assessment and health equity assessment tools. Gender mainstreaming and human rights situation analysis tools can also contribute.

Take a look. I think it underplays the importance of HIA's role and doesn't recognise its status as a more widespread field of practice than some of the other interventions advanced.

The People's Health Movement has a response you may want to endorse.
Posted by benharrisroxas No comments:

What's new on the HIA Gateway?

The HIA Bibliography has been updated from July 2010 to December 2010, and 26 new references on HIA, SEA and MWIA have been added.