The document clarifies the rights and obligations of citizens, government and industry in relation to HIA. It's an interesting read and provides a detailed account of Thailand's far-reaching health impact assessment regulations.

Much of the recent media coverage of the Mab Ta Phut case in Thailand has focused on the burden that HIA is placing on business. This document provides a more balanced and nuanced perspective on the regulations and practices that underpin Thailand's innovative approach to 'healthy development'.
Posted by benharrisroxas No comments:

Adelaide Statement on Health in All Policies

A statement has been developed following last week's WHO/South Australian Government Health in All Policies Conference.

The Adelaide Statement on Health in All Policies [PDF 205Kb] sets out the rationale for the HiAP approach, identifies some of its drivers and mechanisms, and discusses the role the health sector will play.

This version of the statement was developed at the conference and is not finalised, however it has been approved for dissemination. If you have any comments please make them below and I'll make sure they're brought to the attention of those finalising the statement.
Posted by benharrisroxas No comments:

CHETRE is part of the Centre for Primary Health Care and Equity at the University of New South Wales. CHETRE is only the second health-focused institution to receive the award (the Thai Health Systems Research Institute received it in 2005) and only the second Australian institution (the Commonwealth EPA received it in 1996, which is now part of the Department of Environment, Water, Heritage and the Arts). 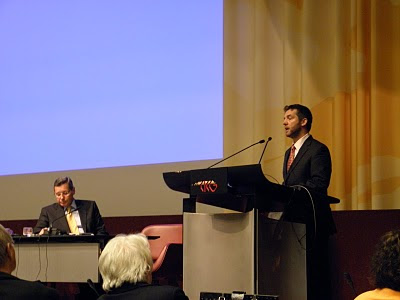 Patrick Harris from CHETRE receiving the award
Past Institutional Award recipients include:

These are some presentations and posters that Patrick Harris and I prepared for the recent IAIA'10 conference in Geneva and the WHO HIA Conference on
Urban development and extractive industries: What can HIA offer?

A Different Kind of Health Reform: Health in All Policies

This approach, known as Health in All Policies, seeks to make ensuring health and wellbeing a shared goal across government. Increasingly the issues that health systems and governments face worldwide are complex and lie beyond the direct control of health ministries. These are issues like ageing populations, sustainability of financing, rising rates of chronic disease, pandemics, and an increasing recognition of the importance of early childhood in determining health throughout a person’s life.

Heal in All Policies recognises this and seeks to make health not only a feature of joined-up government but also the driving force for it. As South Australian Premier Mike Rann noted when he opened the conference, health expenditure will account for the entire South Australian Government budget by 2030 unless bold steps are taken.

Health in All Policies is not an entirely new idea. Twenty-two years ago another Adelaide WHO conference developed Recommendations on Healthy Public Policy that emphasised the important role of all government policy in ensuring people’s health. There has been intersectoral action for health since then, but it hasn’t necessarily resulted in lasting changes to the way health ministries relate to other government agencies.

The impetus for re-focusing on the role of intersectoral policy now is that we face a number of “wicked problems” in health that have implications across government. These are issues such as rising rates of obesity that involve a complex array of stakeholders, a lack of agreement about what the nature of the problem actually is, interlocking constraints and constraints on resources. Wicked problems can’t be solved, only managed.

Health in All Policies is not a panacea but it does represent an important shift from the health sector describing the importance of the determinants of health to working constructively across government on them. It’s an ambitious vision to make health an explicit goal of all of government, rather than a silo to be maintained.

This activity is not without risk however. Having failed to reorient health systems to prevention are we now going to fail spectacularly to reorient the whole of government?

There is some cause for hope however. Reform is in the air, and increasing health costs are providing a renewed focus on a broader prevention agenda. South Australia, whilst still in the early days of its Health in All Policies agenda, has demonstrated that high-level action is possible in Australia.

Health in All Policies – European Union


Ben Harris-Roxas is participating in the Health in All Policies Conference and his views don’t represent the organisers’.

New Guidance: Methodology for Integrated Environmental and Health Impact Assessment - A focus on Latin America and the Carribean

The United Nations Environment Program has put out new guidance on a Methodology for Integrated Environmental and Health Impact Assessment - A focus on Latin America and the Carribean.

Health in All Policies Conference in Adelaide

I'm heading to Adelaide today for the WHO/South Australian Government Health in All Policies Conference. The program is available from:

Are there any particular aspects of the conference you'd like hear more about? Let me know in the comments and I'll report back.

In this issue:
Download eNews PDF 117Kb
Posted by benharrisroxas No comments: