Report on the State of Public Health in Canada 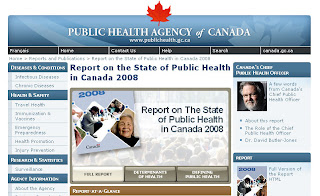 The report summarises the key determinants of health that underlies the health and wellbeing of Canadians: income, employment, environment, housing, education, nutrition, access to medical services and individual lifestyles.

The report described this as:

"A unique approach to public health in the province of Quebec has other provinces and, indeed, other countries, taking notice. By requiring other government departments to consult with the Minister of Health and Social Services in regard to decisions or actions that could impact public health – a broader, more comprehensive and inclusive approach to public health strategies and interventions has been taken.420 The consulting component of this ‘whole of government’ approach came into law with the adoption of Article 54 in Quebec’s Public Health Act in 2001. It states that new measures provided for in an Act or regulation in all provincial ministries be assessed to determine significant impacts of proposed actions on the health of populations. A health impact assessment (HIA) process is currently used to carry out these determinations, an approach that is fairly new to Canada outside of Quebec but more common in some European countries. At the national level, Canada’s National Collaborating Centre for Healthy Public Policy is currently studying HIA in relation to Article 54 and public policy, and will disseminate its findings to the public health community."

The report can be found at http://www.phac-aspc.gc.ca/publicat/2008/cpho-aspc/pdf/cpho-report-eng.pdf

A really interesting, insightful and successful conference was held in Birmingham on 25th June 2008 to formally re-open and re-launch the HIA Gateway site.

The programme included a range of presentations which can be found at the HIA Gateway site.

Click here to see the conference programme and presentations.

Why the UK Department of Health supports the HIA gateway

What's in the gateway?

Networks and exchange of ideas among HIA people

HIA in a World of Social Suffering

The contribution of the commercial sector / quality control

To see some pictures from the conference click here. Looking forward to all the other HIA conferences this year.
Posted by Salim Vohra 1 comment:

On July 30, 2008, Human Impact Partners and researchers at the San Francisco Department of Public Health jointly released the study - a Health Impact Assessment - of proposed legislation that would guarantee all workers in the state at least one hour of paid sick time for every 30 hours worked (also termed the Paid Sick Days HIA).

The legislation, the Healthy Families, Healthy Workplaces Act of 2008 (AB 2716), has passed in the State Assembly and is currently being considered by the State Senate. It appears be one of the first such studies of a state-level labor policy.

A Health Impact Assessment of the California Healthy Families, Healthy Workplaces Act of 2008 finds that "substantial evidence indicates that the law would have significant positive public health impacts for workers and for all Californians." The study further documents evidence showing that guaranteed paid sick days for all workers would help:
The study also finds that workers with the greatest needs for paid sick days, such as those whose children have asthma or other chronic diseases or are low-wage workers, are those that frequently do not have the benefit.

There was extensive press coverage of the HIA and the proposed law, in print and radio media, include major California newpapers and on NPR. The HIA has contributed to framing of the paid sick days laws as health policy.

To access the summary or the full report, visit: http://humanimpact.org/PSD/

Courtesy of Rajiv Bhatia
Posted by Salim Vohra No comments:

I just had a request from someone about how to join the HIA email lists (I've had a few requests over the last year or so) and thought it would make a useful post.

For the UK and Ireland HIA network, go to http://www.jiscmail.ac.uk/cgi-bin/webadmin?SUBED1=hianet&A=1

For the Asia Pacific HIA network, send an email to majordomo@explode.unsw.edu.au with "subscribe hia-seao" as the body of the email.

For the USA HIA network, send an email to sympa@lists.onenw.org with “subscribe hia-usa” in the subject line (see also http://www.feetfirst.info/phbe/HIA-USA-listserv ).

You should get a confirmation message that you will need to click a link in to confirm your subscription (this may take a day or so as sometimes a moderator reviews it before accepting.


You can of course join one, two or all three!
Posted by Salim Vohra No comments: