Environmental Sensitivities: Another vulnerable group for HIA to consider?

The old adage, 'one man's meat is another man's poison' succinctly captures the differing ways that we all can react to environmental factors. For instance, people with blue eyes, red hair, freckles and pale skin tend to be sensitive to sunshine, burning more readily than the rest of us.

Though sunburn is not nice, it's generally temporary, but some people have crippling reactions to such things as household chemicals e.g. air fresheners and detergents; the chemicals used to make furnishings fire retardant; and electromagnetic radiation from electricity generation and distribution.

The Canadian Human Rights Commission has commissioned a new report, The Medical Perspective on Environmental Sensitivities by Margaret E. Sears to look into his area and provide guidance on what can be done about it.

The report summarises the current scientific information on environmental sensitivities. It states that around 3% of Canadians have been diagnosed with environmental sensitivities, and many more are somewhat sensitive to traces of chemicals and/or electromagnetic phenomena in the environment. People experience a range of physical, mental and emotional symptoms with the avoidance of triggers being the key step in both regaining and maintaining health and wellbeing.

For those interested in the original scientific and technical literature, an annotated bibliography is available on request from environmentalhealthmed@gmail.com.

In relation to HIA, it raises an interesting question for HIA practice. Should environmentally-sensitive individuals be considered a distinct vulnerable group in HIAs, one that is routinely considered?

Personally, while I do consider this issue, especially where it relates to EMG fields, I do not consider it formally and more importantly do not tend to suggest mitigation and enhancement measures routinely to ensure that environmental-sensitivity is not exacerbated or generated in development projects that I work on. Partly this is because I haven't researched them, and they haven't come to my attention, and secondly, arguably more importantly, the issues seems to affect so few people and seems so esoteric in the context of poverty, run-down urban environments and widening social and health inequalities that it doesn't merit more than a line or two if that.

However it could be that they are the proverbial 'canary in the coal mine', sentinel individuals who are highlighting a potentially wider problem that is affecting all of us to some extent though not enough for us to have actual physical symptoms.

I'm personally not sure how to handle this issue and would love to know what other people think, have you down a HIA where this was or became an issue?...
Posted by Salim Vohra 1 comment:

The HIA2008 South East Asia and Oceania Health Impact Assessment Conference will be held in Chiang Mai, Thailand from 8-10 December 2008. The conference is being hosted by the Thai National Health Commission.

To find out more go to the conference website.
Posted by benharrisroxas No comments:

Photos from the conference are available from www.flickr.com/groups/hia2007 (you can upload your own photos there as well). For more on the conference go to www.hia2007.com.
Posted by benharrisroxas No comments: 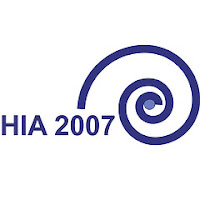 The South East Asia and Oceania Regional Health Impact Assessment Conference was held in Sydney, Australia from 7-9 November 2007. The event was a success, with more than 180 HIA practitioners from across the Asia Pacific region coming together for the first time.

Conference Presentations
Conference plenary presentations are now available on the conference website (www.hia2007.com). Both slides and audio files are available.

Asia Pacific HIA Email List
An email list has been established to facilitate HIA practitioner exchange across the Asia Pacific. To subscribe send an email to majordomo@explode.unsw.edu.au with "subscribe hia-seao"as the body of the email. More information on the listserv is available here.
Posted by benharrisroxas No comments:

Scoring communities on health and wellbeing

We have GDP and GNP and other economic scores we also have SMRs that provide death and illness statistics at a community level but we don't have health and wellbeing scores and their respective scoring systems. The New Economic Foundation has a happiness index which is quite cool that works at national level, they have a report the Happy Planet Index: an index of human wellbeing and environmental impact but that doesn't work yet for local neighbourhoods.

Talking Back To Grownups: Healthy Children, Healthy Communities – a report on the social determinants of health and middle childhood in Canada

the Healthy Children, Healthy Communities (HC2) project engages Canadians (including children) in learning about and raising awareness of the social factors that affect the health of kids aged 9-12 years old. HC2 envisions a Canada in which children’s health is a national priority and children themselves are engaged in understanding and influencing their own well-being.

Through community roundtables and a Child Health Perceptions Survey, children (aged 9-12) and people interested in child health exchange ideas and perceptions about social factors that impact health, including:


Participants of the Healthy Children, Healthy Communities project create plans to improve children's health and to bring their priorities to decision makers in schools, communities and governments. All levels of government are included, be they municipal, provincial, territorial, national, and international. The Healthy Children, Healthy Communities project has four objectives: Project Outcomes include: Link http://www.unac.org/hchc/en/about/index.php
Posted by Salim Vohra No comments: